The Hypatia is a fantastically versatile fuzz/overdrive/distortion pedal.

The basic elements are: a wide gain range, an adjustable low end, a specially designed input buffer, and a MOSFET-based output buffer. The gain range spans from ragged crunch to blown out, bludgeoning fuzz—all while remaining musical. The low end can be tailored for any instrument across a range of musical styles, from doom metal to classic rock to noise rock.

A specially designed input buffer preserves the resonant filter effect of coupling passive magnetic effects directly to a low-impedance transistor input stage, while still presenting a modern, high impedance at its input. Which means the Hypatia will sound great wherever it is placed in your signal chain.

To round things out, a MOSFET-based output buffer (lifted almost verbatim from the Mandorla), provides enough output volume to get even-more drive straight from your amp, as well as impart some amp-like flavor of its own—which complements the ragged, transistor-y core of the Hypatia perfectly.

The Tone Report on Reverb.com / September 2018

This pedal, The Hypatia, made by Dusky Electronics, is SO. GREAT. SO CRAZY GREAT.

It's a fuzz/overdrive/distortion pedal with four knobs, and you can move those knobs around until your bones are sand and water is a folk tale and you still might not be done finding out about How Your Guitar Can Sound. A subtle overdriven bump in level as you mess with the pickup volume; crushed velour fuzz with a variable amount of ground glass mixed in; an enveloping almost-blown-all-the-way-out-but-somehow-each-string-is-now-more-clear distortion that can set a forest on fire. These are some cool things that happened while I played with it.

The Meat, Heat, and Light knobs are all very interactive, with the range and response of one being dramatically altered by the settings of the other two. We suggest starting with everything all the way up, then slowly bringing things back down to find the sound you're going for.

The Meat knob controls low-end content. With the knob all the way up, the sound is bassy and blown out, almost like a square wave on a synth—especially with the Heat knob at maximum, as well. Rolling back the Meat control allows mid-range and treble to come through more clearly and revoices the circuit for a more cutting sound.

The Heat knob controls overall gain and can take Hypatia from singing, sustaining fuzz and distortion at one extreme to crunchy, textured overdrive, as it's rolled back.

The Light knob controls the amount of treble in the circuit and can be used to take the edge off of some of the otherwise harsher settings you might find.

The combination of a passive guitar pickup plugged straight into a pedal with a low impedance transistor input forms a resonant filter--frequencies near the resonant frequency are boosted while frequencies above the resonant frequency are filtered out of the signal. This is the reason a Fuzz Face or a Rangemaster only really sounds right plugged into straight from the guitar. The Hypatia’s specially designed input buffer retains what sounds "right" about that connection without the need for the pedal to be first in your effects chain.

This design started out fairly differently from many of my others. One day, my friend, Nick Pedersen, of Track and Field Recording, brought me a little green pedal he'd been making and calling the “Green Bastard.” He was getting tired of making it and wanted to know if I'd be interested in making it instead. It was a one knob (output volume) bass fuzz pedal that was pretty deliciously gnarly. After some probing, it turns out it was a DIY project I'd never heard of before called the “Bazz Fuss.” Since I wasn't super-interested in just cranking out someone else's design verbatim, I said I'd take some time to play with it, see what I could do with it, and get back to him.

The first thing I did was add gain and bass controls (Heat and Meat), which greatly expanded the versatility of the circuit. Embarrassingly, at this point, I did some more Googling and found the “Deluxe Bazz Fuss” circuit which does pretty much the same thing. (A minor difference is my gain control doesn't crackle.) I also did something that is fairly standard for me: I added an input buffer so that a guitar would see a nice, high input impedance no matter what and the fuzz would sound the same wherever you put it in your signal chain.

The first naive attempts at this, however, lost the vocal characteristic of a magnetic pickup plugged straight into the fuzz circuit, which led me on a long journey of trying to replicate that interaction, that led to experiments with inductors and finally landed on a second order active low-pass filter that preserved the presence bump that occurs with the passive filter formed by magnetic guitar pickups straight into the complex low-input impedance of the fuzz.

During all of this, I also noticed when rolling off the bass and the gain, that the circuit could get scratchy and abrasive in an unpleasant way, which led me to experiment with a FET-based output buffer. The tube-like qualities of what was essentially just the Mandorla circuit, helped tame the harshness, give more output volume, and provided a means of adding an active treble control (Light).

All told, I spent the better part of a year nailing down this design. It was important to me that it be versatile, sound great, and be musically useful, just like my other designs. Despite my embellishments, however, the heart of the design is still the venerable Bazz Fuss circuit. I encourage anyone interested in DIY pedals to check this out, as the basic circuit is very simple and easy to build, and, as you can see, lends itself to a whole world of modifications. 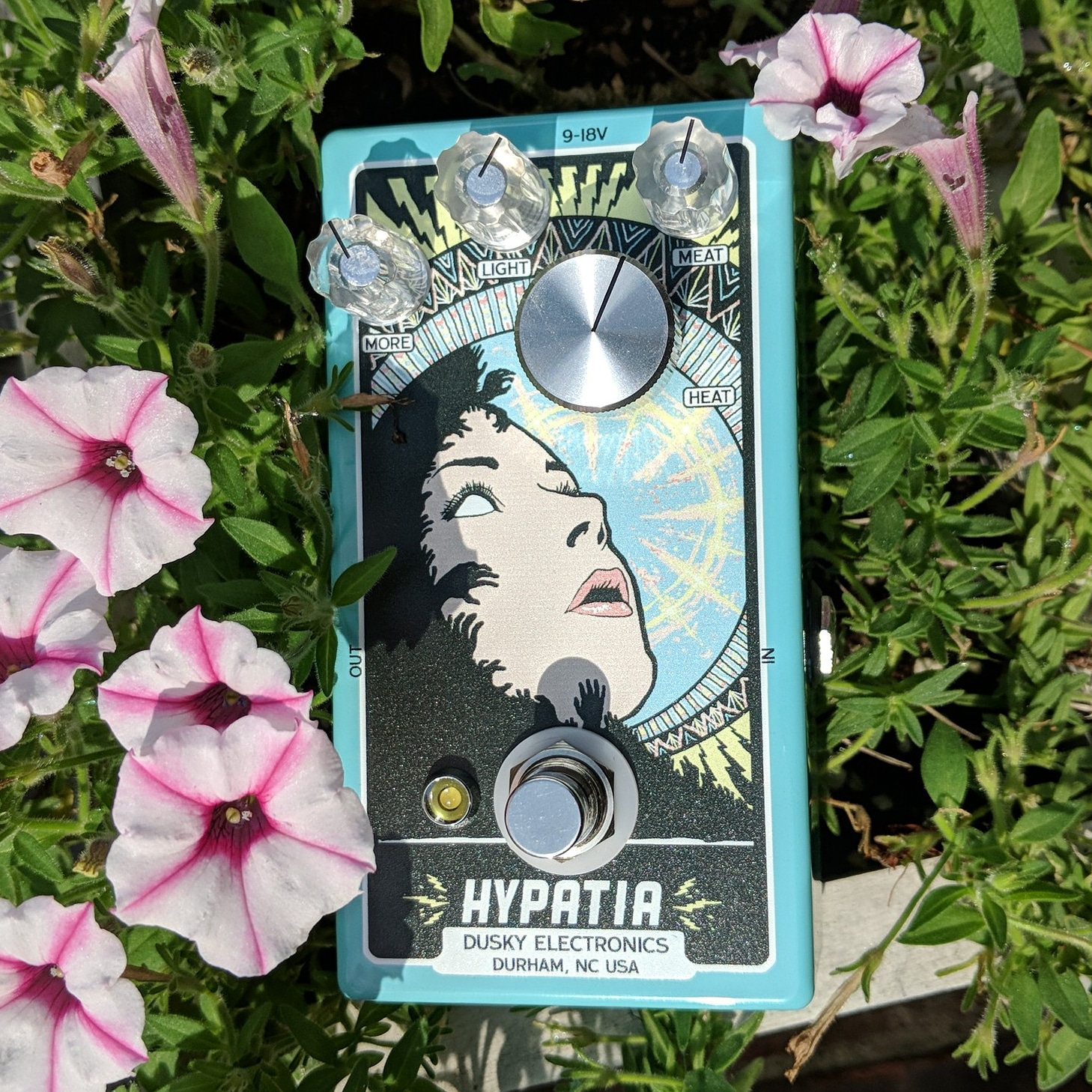